With Klever Swap 2.0, we've made it faster, cheaper, and easier to use.

by Maluh Bastos
in Global, Wallet
Reading Time: 5 mins read
3k
A A
0
Share on FacebookShare on Twitter

In addition to being easy to use, straightforward, and fast, Klever Swap also has a lot of options, allowing users to exchange coins from different blockchains (e.g. BTC to TRX or ETH) with high security, total privacy, and unmatched speed.

With Klever Swap’s second version, the product is even faster, more powerful, and the user experience is improved.

What does Klever Swap V1 already have?

Several users have already fallen in love with the Swap in its first version.

For those who haven’t heard of it yet, let me describe it really quickly:

The Swap is remarkably simple to use and one of the most powerful features inside the Klever Wallet.

Once you download the Wallet, you’ll be able to purchase crypto through credit and debit cards, send & receive them, charge them, or simply store them.

However, in case the user needs to change one crypto for another, usually they go to an exchange to do so.

The exchange enables you to trade cryptocurrencies and different tokens, but it also requires a little bit of a more in-depth knowledge of trading (reading charts, candles, prices, orders, etc.).

The goal for the swap is to enable this trade without having to send the user to the unknown lands of trading. 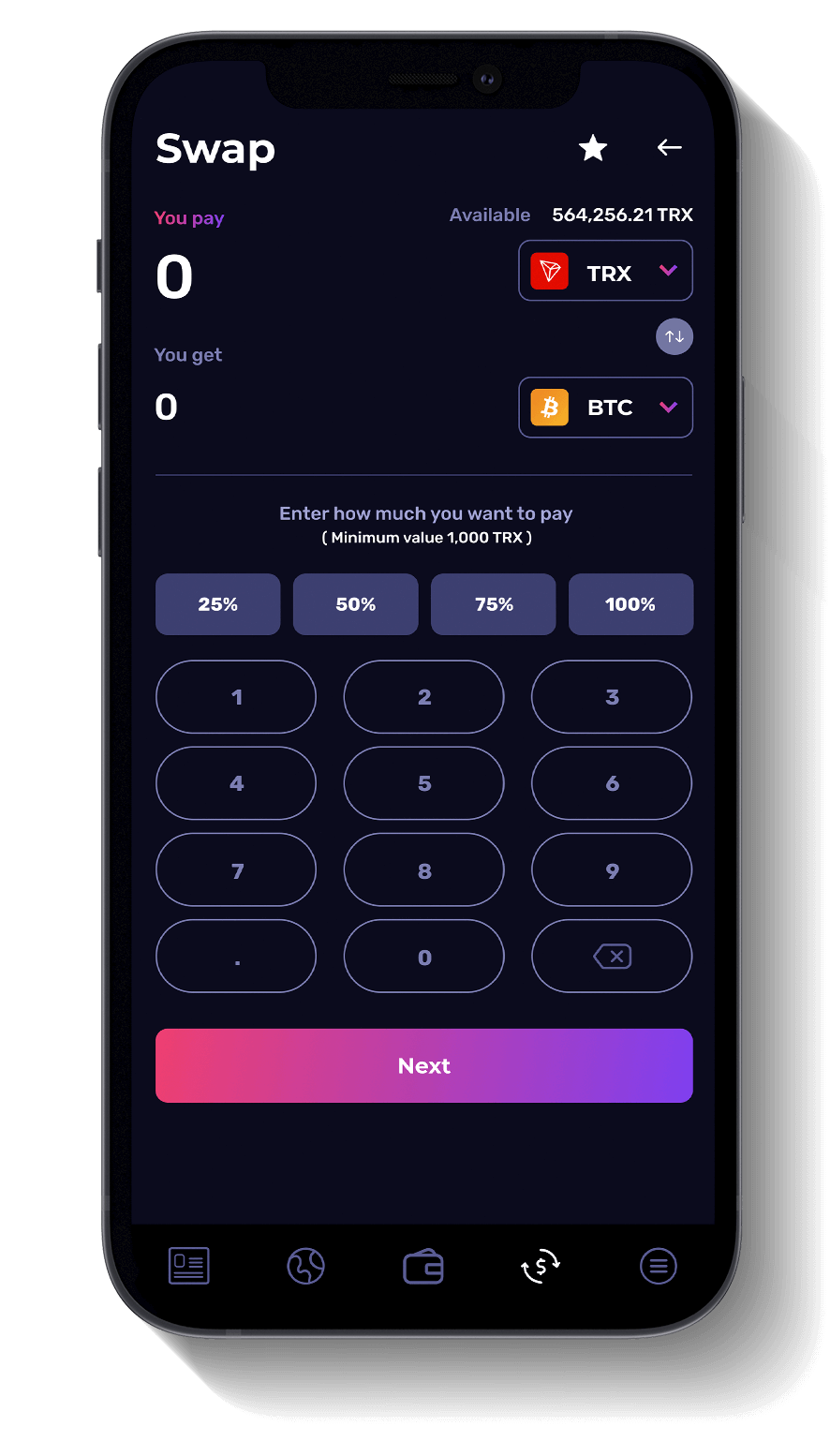 Example of a Klever Swap’s display, in this case, swapping TRX to BTC

It is always good to remember that the aim behind the Swap is to make it simpler, faster, and more convenient for our users to exchange cryptocurrencies.

But how does this simple trade (aka Swap) happen?

Just kidding. By monitoring live price action on top-tier exchanges, our engine creates a price index that is used by the Swap.

When a user goes to the Swap screen on the Klever Wallet app, they will see the default Swap pair from BTC (BTC) to USDT (USDT).

The user then can make a quote to check the price prediction offer, select a new token pair to quote as well as type the amount he/she wants to swap.

And that’s the part I must let the whitepaper speaks for itself:

“As part of Klever Exchange, the swap itself is conducted by fully autonomous bots, built in-house, which continuously seek the best exchange rate and prices among the top exchanges, and then execute the Swap with high precision, security and speed”.

The success of the Klever Swap is proven by its numbers.

Check this out: in the first month of the Klever Swap (November 2019) it only had 33, yes, 33 swaps done, being its lowest number.

As another example, last year, the Swap registered more than 20 million swaps in volume – and only in one of the most traded pairs: TRX/ETH.

In volume, some top swap pairs are:

A great part of the Swap success also comes from the small fees charged to make the swaps.

Nowadays, the fees to swap consist of 0.55% of the swapped amount – and the user can make it even lower and get 25% reduction by choosing to pay the fee in KLV token.

What was already good will get even better.

The changes coming in the second version of Swap align with the company’s purpose to always grow and perfect their products.

With K5 BETA already on and the definitive version just around the corner, of course more improvements would come with all its features – and the Swap would definitely not be an exception.

According to Marlon Gomes, Klever’s Head of Software Architecture, those are the enhancements predicted to come with Swap V2:

The new engine has a new algorithm that will trade the amounts watching their impacts on the market.

It will help Klever Swap to have more accuracy in the trades and deliver assets with less slippage based on the promised amount.

The latest version of Swap is aggregating multiple liquidity providers. That means it will be able to provide higher limits into the tool with also better prices.

Mixing serverless stack with an event-oriented architecture, Klever was able to handle all the steps faster than the legacy version of Swap.

The entire execution time of the Swap flow during the tests resulted in less than 1 minute (time may vary based on the network and liquidity).

Since the entire flow was enhanced, the Klever Swap team also managed its cash flow to reduce the network.

At swap legacy some swaps could fail based on confirmation time or not enough liquidity.

The new engine has a new trading algorithm to avoid this kind of issue together with better monitoring to check issues faster and reduce the failure rate.

The new swap will be delivered onto the web and further on will be placed at K5.

In the words of Marlon Gomes:

“The Swap V2 is the overcoming of all issues we have faced at the first version – it’s the combination of hard work and community driven development”.

If you are excited to try out the Klever Swap and its improvements, download the Klever Wallet now!